"For Christ’s love compels us, because we are convinced that one died for all, and therefore all died. And he died for all, that those who live should no longer live for themselves but for him who died for them and was raised again."

Jesus, Paul, the apostles, the early church fathers and apologists were all bold in their proclamation of truth. Our calling is the same. Approximately 3,500 babies are murdered each day, we are not called to sit back and relax but to be bold and speak up for those who cannot speak for themselves.

Just as the abolitionists of the nineteenth century sought to abolish the evil of their day, human slavery. Abolitionists today seek to abolish one of the greatest evils of our day, human abortion. Human beings are created in the image of Almighty God, the very Creator of the universe. The weakest and most helpless among us have been subjected by this wicked culture to accepted, legal, and systematic destruction.

Are you really saved?
Children & Youth

Every day in the United States 3,500 babies are murdered. Chances are there is an abortion clinic close to your home or church. Abortion has been promoted mainly by Planned Parenthood as simply being women's healthcare and only a woman's choice. However, abortion is murder and legalized child sacrifice. You can do something about abortion in your city.

Many Christians would object to abortion ministry as not being their calling. However, there are countless church activities which we attend without every asking ourselves if we were called to attend it. Were you called to go that conference last week or that potluck last Sunday?

Following in the footsteps of former abolitionist movements, we aim to end one of the greatest human miseries and moral evils ever to be entrenched in our world. Human beings are created in the image of Almighty God, the very Creator of the universe. The weakest and most helpless among us have been subjected by this wicked culture to accepted, legal, and systematic destruction. We are simply attempting to answer the question: What does Christianity look like in a culture that practices Child Sacrifice? And put our answer into action. 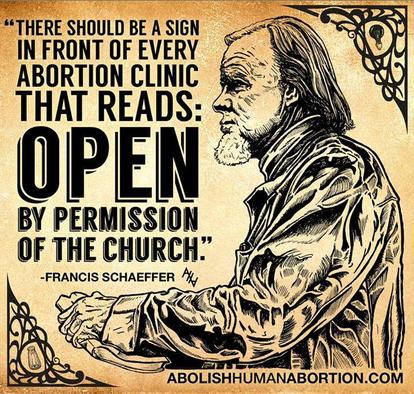 ​"When you spread out your hands in prayer, I will hide My eyes from you; yes, even though you multiply prayers, I will not listen. Your hands are covered with blood. Wash yourselves, make yourselves clean; remove the evil of your deeds from My sight Cease to do evil, learn to do good; seek justice, Reprove the ruthless, Defend the orphan, Plead for the widow."

Abortion is sin. We believe it is the responsibility of the Christian church to rescue those being taken away to death (Proverbs 24:11) and to expose the evil of abortion (Ephesians 5:11).