We do not endorse KHOP in any way.

​Pastor Miles said that anytime someone is brought to the Rock Church it is not to copy them but to learn from them. However, we imitate what we learn. Randy Clark's ministry is to teach people how to heal and impart.

When we review the Rock's recent history, then watch Pastor Miles' apology, things do not line up. Why was Global Awakening invited in the first place?

In his apology Pastor Miles again created a false dichotomy between being influenced by Satan and not exercising the power of God at all and diving straight into the supernatural gift of healing. There needs to be a balance in this age of deception because there are those who perform miracles that Satan is the source of.

​Pastor Miles said to stay focused on Jesus, yet it would seem that he himself is seeking signs and wonders. Our encouragement to you is to keep your eyes on Jesus, who is the author and perfecter of your faith (Hebrews 12:2). Jesus' last command was to go into the world and preach the Gospel (Mark 16:15, Matt 28:19-20). The Gospel is the message of Christ's death, burial and resurrection (1 Cor 15:1-4). This is the message we must be focused on and preach to others (1 Cor 9:16) because it is the only message which is able to truly set captives free (Luke 4:18, Isaiah 61:1).

​If you attended the Global Awakening conference with the assumption that everything being taught was true and now you have come to the realization that it is false, please acknowledge this before Jesus Christ, repent of the false teaching, renounce it and turn back to Jesus Christ.

"Therefore, prepare your minds for action, keep sober in spirit, fix your hope completely on the grace to be brought to you at the revelation of Jesus Christ." 1 Peter 1:13

Members of the Rock Church and anyone who looks to Pastor Miles McPherson as a leader needs to know the answers to these questions.

Pastor Miles said, "in the Bible there are extreme manifestations of God, of how people reacted, that is in the Bible we are absolutely not seeking that, we are not seeking to make that apart of our services".  ​Yet in his video promoting Global Awakening he explains that the main reason for the conference is because he has always wondered about the greater works Jesus said Christians will do. He attributed the amount of people getting saved and healed to Global Awakening.

Heresy is the issue and this wasn't addressed in Pastor Miles' apology. Also, if he believes the Toronto Blessing was a real revival from God or the claims made about Randy Clark being a heretic.

1. Does Pastor Miles believe Randy Clark is a heretic?

2. Was the Toronto Blessing a real revival?

3. The history of Randy Clark and Toronto Blessing is alarming, does Pastor Miles agree or disagree with it?

4. What about Pastor Miles' connection with Maria Sainz who believes gold dust is a real miracle and received her impartation from a Vineyard pastor?

5. Randy Clark is known for the Toronto Blessing, why was he allowed to speak at the Rock Church?

6. If Pastor Miles does not agree with Randy Clark's teaching and   believe he is a heretic, was Miles truly guarding his flock?

7. Why was Randy Clark, who has been branded a heretic by the Christian evangelical community because of the last twenty years, given a platform of authority to teach?

8. How do we distinguish true miracles from false miracles?

Others have recognized this as well. One person is Mary Denora who supports Global Awakening and is the wife of the Pastor of Kingdom House of Prayer (KHOP) San Diego. She noted on Facebook that Miles apologized for the confusion created but did not apologize for bringing Global Awakening.

Sifting through the Rocks

Pastor Miles encouraged his congregation that the foundation for his life and the Rock Church is still the Gospel of Jesus Christ. He apologized for the confusion over hosting Global Awakening however he did not apologize for inviting them and hosting them specifically Randy Clark. After he apologized for the confusion he said but Jesus Christ came to heal the sick, cast out demons, heal the broken hearted and the Rock Church will do the same. It is as simple as that.

Pastor Miles apologized for the confusion, but why was there confusion in the first place? There was confusion because we heard Pastor Miles claiming this conference changed his life, saying he sent three teams of his staff to this conference, he implied we should trust the men speaking at this conference because of their experience. Then, Randy Clark's connection to the Toronto Blessing, the New Apostolic Reformation and association to heretics like Todd Bentley became well known.

Unfortunately for Pastor Miles, it is not as simple as he claims. There is heresy creeping into San Diego and the most he did to address the heresy was say, 'We are not trying to be like the Toronto Blessing". If this was truly the case why was Randy Clark who is known for the Toronto Blessing and has never renounced it allowed to speak at the Rock Church?? There was NO warning given to the public of Randy Clark's past or warning to be discerning when attending the conference. Instead, Pastor Miles basically said to trust Clark and learn from him because he knows what he is doing.

Pastor Miles is held to a higher standard as a teacher and a pastor. He said this is a journey we are both on together. But Hebrews 13:17 says, "Obey your leaders and submit to them, for they keep watch over your souls as those who will give an account. Let them do this with joy and not with grief, for this would be unprofitable for you." Pastor Miles' responsibility is to guard over the souls of his congregation, instead he let a wolf in sheep's clothing come in.

There are a couple of problems with saying, "we are not trying to be like the Toronto Blessing". First, those who affirm of the Toronto Blessing as a real revival from God believe they are able to impart an anointing or gift to another person. Randy Clark spoke at the Rock Church and was allowed to pray and lay hands on those who attended. Did Randy Clark impart something to others?

Second, the speakers of Global Awakening adhere to a different theology called Dominion or Kingdom Now Theology. This theology is the core theology to the New Apostolic Reformation Movement. Does Pastor Miles now believe this theology and want to bring it into the Rock Church?

Third, why was Randy Clark invited to speak at Pastor Miles' Church? To learn from him. What is Randy Clark known for? The Toronto Blessing.

Pastor Miles did not renounce or repent for the conference, he never said it was wrong to host Global Awakening and never said he disagreed with their teaching or history.

Pastor Miles McPherson Speaks Out About the Confusion Over Inviting

"Let no one deceive you with empty words, for because of such things God's

wrath comes on those who are disobedient." Ephesians 5:6

If you have not already made yourself familiar with the information we have on the Rock Church, please click here. 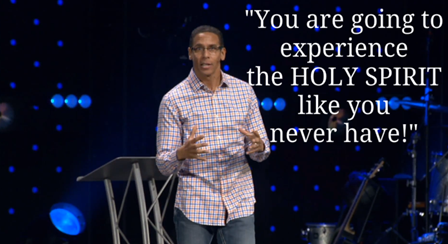